The City of Austin, arguably the most progressive county in the state of Texas, passed a city ordinance last May requiring drivers on rideshare apps to be fingerprinted by the state prior to picking up passengers. Uber and Lyft threatened to leave the city if passed, and they stayed true to their threat. Austin has been relying on pop-up non-profit rideshare app RideAustin for transportation the past 12 months, but with recent action taken by the Texas Senate, the city ordinance may be overruled.

“A statewide framework for ridesharing will help bring greater economic opportunity and expanded access to safe, reliable transportation options to more Texans,” Sarfraz Maredia, General Manager for Uber Texas, said in a digital statement. “We look forward to making Uber available in more cities across Texas and continuing to serve drivers, riders, and the communities in which they live.”

The only remaining step is for Governor Greg Abbott to sign and approve the bill. Typically, Texas bills become law 90 days after they’re signed by the Governor. However, if a bill can garner 2/3 support from both the House and Senate, it can be fast-tracked and made law immediately after Gubernatorial approval. How will RideAustin and Fare keep their share of the Austin rideshare market? We’ll see very soon, and word on the streets of Austin says Uber will be massivley re-adopted. It’s likely that RideAustin looses upwards of 50% of their rider-base within the first 48 hours of Uber’s return.

Uber isn’t wasting any time. Twitter user @jtanzer posted a photo of the new Uber Austin office parking lot, preparing for a massive influx of driver signups once HB 100 is signed into law. 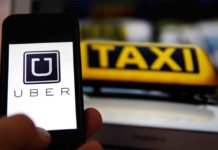